In early February, 1948, a group of Auburn citizens gathered together formally for the first time. Many of them were veterans of World War II, soldiers who had bravely served their country. They had met in restaurants and living rooms before this meeting, plotting and planning their course of attack. As usual, they came armed with clubs…and golf balls. This was the first public meeting of the Green River Golf & Country Club, the group that created the first publically-accessible nine hole golf course in south King County. The Green River Golf & Country Club officially organized in the 1940s, but the land they would develop into a well-groomed golf course was initially a hops crop at the end of the 19th century and then part of the Isaac Evans farmland. 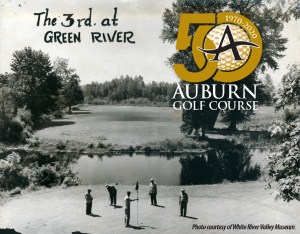 The City of Auburn purchased the course in 1969 to fulfill a need for a public recreational golf facility in Auburn. Additionally, the purchase of land previously belonging to the State of Washington, located just to the south of the old golf course property, enabled the city to expand the course to 18-holes, including the unusual dual-elevation portion of the course. Unlike most area golf courses, the first four holes of the modern golf course are at 250 to 400 feet above sea level; the remaining fourteen holes are at an elevation of about 50 feet. The course was reopened in 1970 as the Auburn Municipal Golf Course under the management of the Parks, Art, and Recreation Department. 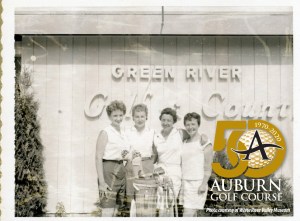 Nestled along the Green River and situated on 150 acres, the eighteen-hole Auburn Golf Course offers scenic views from several hillside holes. The fair, but challenging par 71 course is just over 6,314 yards and hosts over 50,000 rounds of golf each year. The course features over 20 bunkers, two ponds with fountains, a waterfall, and a slope rating of 120 from the middle tees and 123 from the back tees. 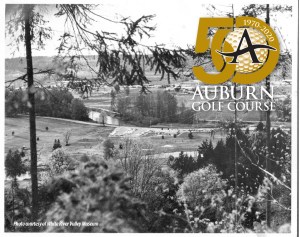 The current clubhouse was built in 2007 and was the last major update to the course. It includes a pro shop, 150-seat banquet and meeting facility, a basement for carts and general storage and a 110-seat full-service restaurant. This clubhouse, located on the same portion of land that the Evans family once farmed hops on, has some of the lodge-style feel that the founding members of the golf course had originally hoped for.

With competitive rates year round, the Auburn Golf Course also offers a pro shop, equipment and power cart rentals, professional instruction and lessons, tournaments and leagues and youth activities. The Auburn Golf Course Men’s & Ladies Club combined exceed 700 members, one of the largest in the state. An additional 200 golfers participate in the Merchants League and Couples League.

To celebrate the 50th Anniversary of the City’s ownership of the course, special rates will be offered various times throughout the year. Make sure you are signed up to get emails from the course or follow the Course Facebook page to be notified of special offers.

View All Our Upcoming Events!

Come out and golf with us today!
View Larger Map